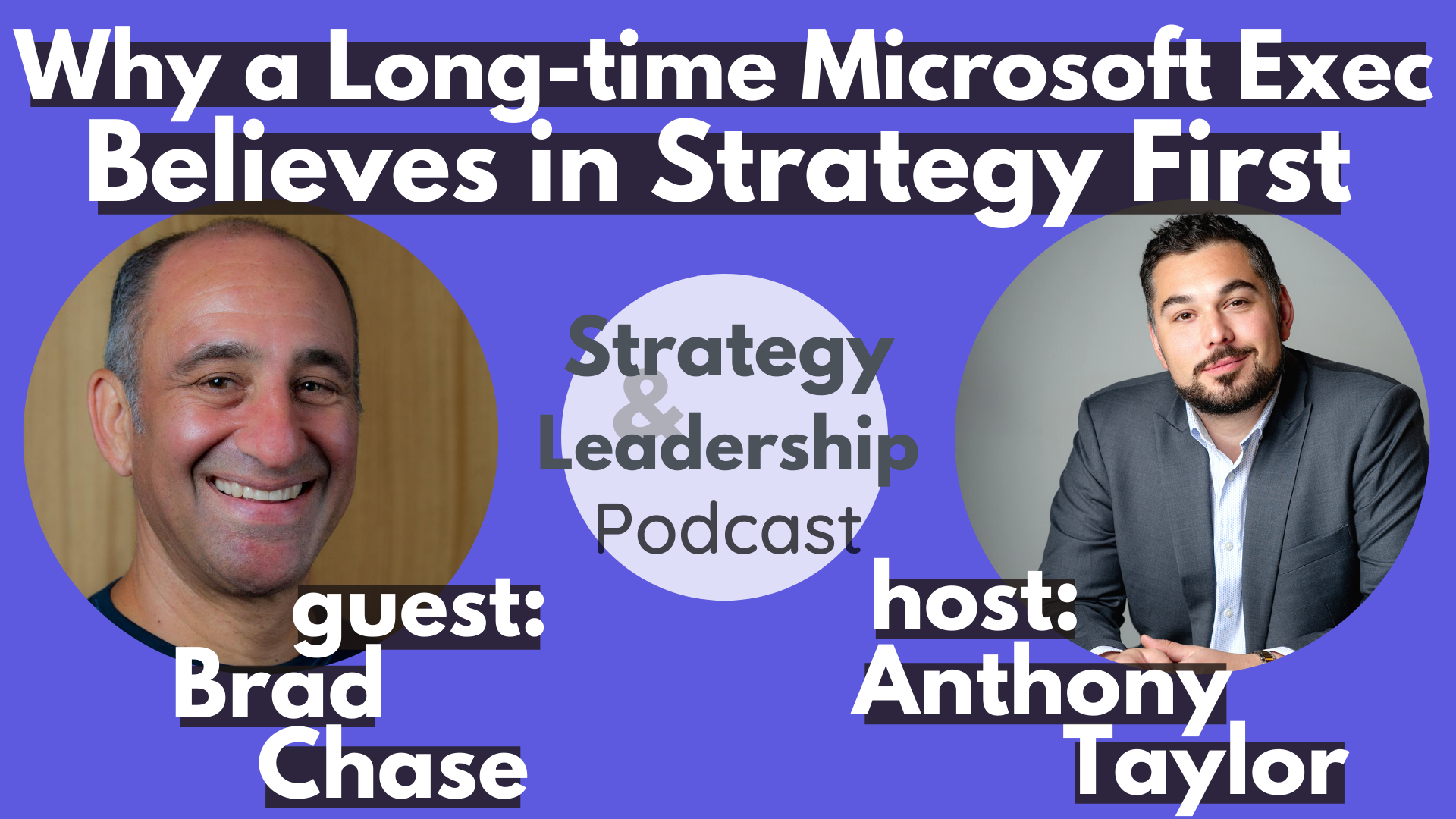 Brad Chase spent over 14 years as an executive at Microsoft, finishing as a Senior Vice President leading a team of over 4,000. Brad was a part of several major project at Microsoft, including the  complete turnaround of MSN.com, leading the marketing effort for Windows 2000, Windows 98 and Internet Explorer, as well as developing and executing the award winning marketing strategy for Windows 95.

If you're just starting the strategic planning process, make sure you ask your team the right questions:

Brad is now a speaker, marketing and leadership advisor, and the author of Strategy First.

On today's episode of the Strategy & Leadership Podcast, we're super excited to have Brad join us to discuss Microsoft's strategy that led to success, his Strategy First Model, how he turned around MSN.com, and some common roadblocks strategy leaders should watch out for.

Here's a break down of the episode:

Brad explains how making singular bets is the key to strategy. Microsoft made a few early bets that would lay the foundation for years to come, which included a bet on the personal computer for consumers, then a bet on graphical user interface, a bet on the cloud, a bet on devices, a bet on consumer entertainment, and so on.

Microsoft's culture mirrored that of Bill Gates and the leadership team, as many companies do. Aside from the extreme hardworking attitude and long hours, self-criticality, accountability, learning, intensity, dealing with change, relentlessness, strategy, and hiring smart people that could adapt over those with lots of experience were all part of that culture.

During his time at Microsoft, Brad said the most important thing he ever learned was that "nothing is more important than strategy". You could have all the right attributes for a leader: empathetic, compassionate, a visionary, etc., but if you don't have the right strategy, it won't matter. He also highlighted some of the other key aspects of leadership he considers most important, which include hiring for your weaknesses, communicating, curating culture, aligning the organization, tracking and more.

He defines strategy as having three main components: execution, market potential and customer value. Modeled after Einstein's famous formula, the 'c' is squared because customer value is that much more important. He also explains how his Strategy First Model can be used to gauge the success of your strategy against that of your competitors, and how you can go about improving your strategy.

Want to create a strategic plan without hiring anyone? Create your own from scratch:

When Brad was brought into lead the MSN strategy, there was no strategy and morale was the lowest in the company on employee surveys. They were "the laughing stock of Microsoft". Once he developed the new strategy to move the department forward, he generated alignment and made sure everybody knew what they were trying to achieve. Employee morale improved immediately once people knew what the strategy was and what they were working towards, and both traffic and revenue would go on to double shortly after.

Brad breaks down some of the most common and important roadblocks to watch out for in business. He says many organizations tend to underestimate their competitors. A lot of the time we incorrectly assume the competitors can't react as fast and can't do things as well, but in the end most of them are pretty smart and capable. He also mentions arrogance, too much complexity and lack of customer empathy as major roadblocks.