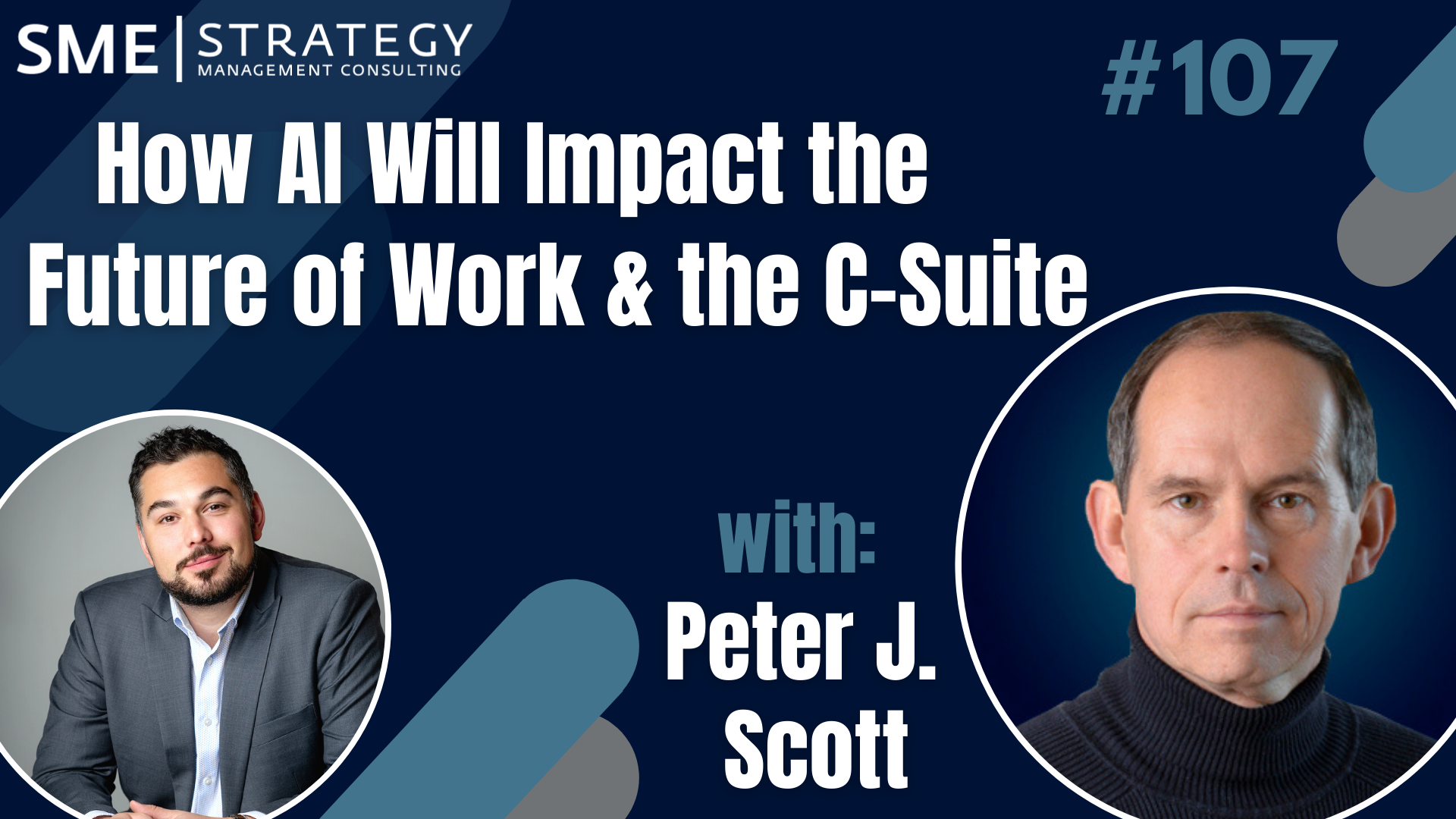 Peter J. Scott is an IT specialist and futurist who worked for NASA for over 30 years. Now, he's a coach and the author of Crisis of Control: How Artificial SuperIntelligences May Destroy or Save the Human Race, and the host of Artificial Intelligence and You, a podcast that seeks to communicate the intricacies of both the challenges and opportunities of artificial superintelligences in away that non-experts can grasp.

On this episode, Peter joins us to discuss the future of AI in the workforce, his big takeaways from working at NASA, using an engineers mindset to approach people problems, and so much more.

SME Strategy · How AI will Impact the Future of Work & the C-Suite w/Peter J. Scott Ep#107

Having a strategy session with your team soon? Make sure you ask these questions first:

Here's a breakdown of our previously live conversation:

"It's going to impact everything". Peter says that while the future is still arriving slowly, it's arriving faster than ever right now. Human brains don't get bigger, so there comes a time when tech advances faster than we can adapt - which will likely happen within the next decade.

The technology boom that we were waiting for in the 90s and 00s has arrived now. Watch for different types of technology to combine and create something with much higher potential. As an example, when combining cheap space travel and fast internet, we end up with something like Starlink, which is linking the entire globe together at once.

By definition, NASA had to be on the leading edge. Technologists like himself would expend lots of effort to create a few extra percentage points of productivity using software - and yet proper communication and team organization could produce results far out of proportion than the ones they had in sight. Peter explains that this is less accessible to engineers because it isn't hard science. The lessons is this:  Instead of focusing only on things that you can measure, look towards the aspects that will make the biggest difference.

Peter discusses how an engineers mindset naturally leads to troubleshooting and process thinking. He's big on systems thinking, and likes to focus on governance, roles & responsibilities, communication, processes, and documentation. He's also certified in neurolinguistic programming, which taught him a system for understanding peoples' beliefs and behavioural systems. He also learned that the purpose of communication is the response it provokes - so if your communication isn't landing, you have to try different approaches until you get a satisfactory response.

Looking at the two shuttle accidents, the Apollo 1 fire, and a couple failed Mars missions - they were all due to communication problems.  Managers weren't listening to engineers about safety, and simple tests were disregarded, while time and attention was focused on more complex problems and testing. Ultimately, the communication problems came down to a clash of values around safety, efficiency and timeliness. The lesson is to make values explicit from the very beginning.

Peter says it's still a while before c-suite members need to fear for their job, but right now, a lot of C-suite functions are related to business intelligence (reports from marketing, forecasts from CFO, trends from HR). AI is approaching the point where it can perform knowledge work typically carried out by C-Suite members. There's also a possibility that AI will allow the automation of communication between those C-suite functions (at the speed of light). The company that can figure that out will change the game immediately and erase their competition.

Learn how a strategic planning consultant can work with your leadership team to create alignment, buy-in and a common vision of success:

Or learn how to create your own strategic plan from scratch with our video course:

To learn more about Peter's work, check out his podcast called Artificial Intelligence and You, and take a look at his book, Crisis of Control: How Artificial SuperIntelligences May Destroy or Save the Human Race.